REMOVING THE STATUES WHICH HONOR THE EMANCIPATION PROCLAMATION IS A GOOD THING. HERE'S WHY: 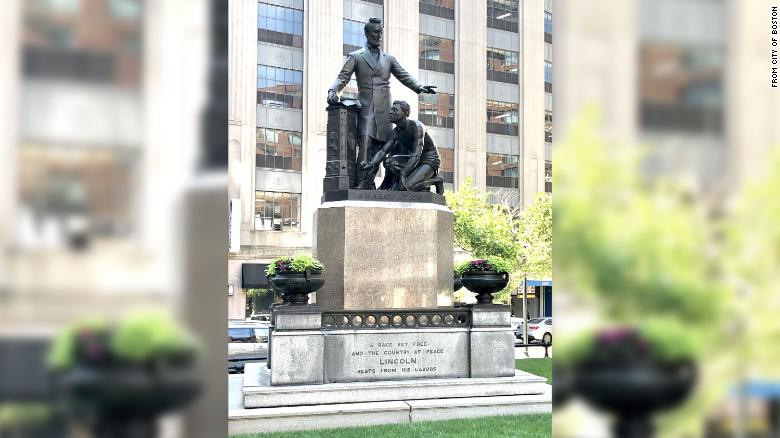 THE STATUE ACCURATELY REFLECTS THE MASTER/SLAVE RELATIONSHIP
WHICH THE EMANCIPATION PROCLAMATION AND JUNETEENTH EMBODY.

NOTE THAT THIS STATUE DOES NOT ACCURATELY REFLECT THE 13TH AMENDMENT'S MUCH DEEPER MEANINGS.


The Emancipation Proclamation/Juneteenth
Are Actually Celebrations of
Momentary Bondage, then Freedom (for Some).

(Bondage to the Federal Government)


And Slavery is Still Practiced Around the World, in Various Places.

Things Are Not Always "Black and White", "North and South".

There is some (small) error, in my opinion, in celebrating the Emancipation Proclamation (Jan. 1, 1863) and/or Juneteenth (June 19, 1865) as the endings of slavery, when on those dates, slavery did not actually end in the USA. I'm afraid that the factual "falseness" of such should be a red flag that shouts, "THIS IS ACTUALLY ABOUT CONTINUING SLAVERY for a few more years or months!". The Confederate States of America never really existed according to President Abraham Lincoln, and was also never recognized as a new nation by any world power. Therefore, we're talking here about actually ending slavery in the USA, not in any fictional country, like the CSA.

The extreme happiness, especially in Texas, that Juneteeth produced and still produces, should not be discouraged or ignored. That's the good part.

Before the 13th Amendment was ratified, there were still legally enslaved people in the USA in U.S. territories such as New Mexico Territory, Utah territory, and in parts of what later became the state of Oklahoma south of latitude 36°30' N., and in the states of Delaware and Kentucky. The Emancipation Proclamation only applied to those calling themselves Confederates who were in armed revolt against the United States, and who owned slaves. In fact, there were probably many other people still enslaved in other non-rebel U.S. states in the USA from April until December 1865. (Wikipedia article concerning the 13th Amendment on July 5, 2020 states that there were between 65,000 and 100,000 enslaved persons in the USA still remaining to be freed on Dec. 5, 1865.)

Note that in order for the Emancipation Proclamation to have any power, the Federal Government had to assume ownership of confiscated properties - slaves - previously owned by "Confederates" in revolt, and this ownership of confiscated slaves had to take place before the 13th Amendment was fully ratified, since after slavery really ended (in most respects), even the Federal government was prohibited from enslaving anyone except as a punishment for convicted criminals. This is a standard war power, to assume ownership of rebel property. But this did not end slavery in the USA.

Although the 14th Amendment later changed the general rules for citizenship of the USA, functional U.S. citizenship, such as exercizing the right to vote for President and Congress-people, was and is still a state-given right to its citizens. Most freed slaves lived in U.S. states when they were really freed in June or December 1865, but they were not fully functional citizens until the states in which they lived made them state citizens which automatically includes U.S. citizenship. This briefly occurred a few years later during the 2nd Reconstruction era after the 14th Amendment was rammed through, somewhat initially under military coercion in the defeated southern states. Probably due to that coercion, many states ratified or re-ratified this amendment after 1877.

Slavery actually ended mostly on either December 6, 1865 when newly re-admitted Georgia became state number 27 of the 27 required states needed for ratification of the 13th Amendment, or on December 18, 1865 when Secretary of State William Seward made the official proclamation that the 13th Amendment had been ratified.

If black people are actually citizens of the USA in 2020, then they should not be celebrating their own brief bondage to the Federal Government, which tends to nullify citizenship rights. If so, such "bound people" cannot function as both free citizens, and bound people at the same time. Choose one or the other, OK? (And I'm not sure that the Federal Government wants to be the owner of anyone.)

To really free the slaves, we had to change our "slaver" constitution.

Why? Because that's what the U.S. constitution states.

Note that U.S. citizens who live in most U.S. territories who want the right to vote in national elections, can move to any U.S. state, become a voting citizen there, and then can visit their territorial 2nd homes while retaining their citizenship in the U.S. state.

Recently, Senator Mitch McConnell pointed out that former President Barack Obama is a descendant of slave owners. Obama himself admitted that fact. Obama is not the only former U. S. President to have that distinction.

I would speculate that most, if not all, people on our planet have ancestors who practiced slavery.

Here's the Wikipedia article about "Serfdom in Russia", which ended only around 1860.

The Vikings were also involved greatly in the business of slavery throughout the (mostly) Western world. Historically, the Viking era was almost over when the "Vikings", aka, "the Normans", invaded England and defeated the native Anglo-Saxons in 1066. On this early date, both the invaders and the invaded were actually Christians. Until Christianity prevailed in Europe, slavery was very prevalent. Eventually it became forbidden for Christians to enslave other Christians, but it was still OK for a while longer for heathens to be enslaved. Or wives.

But that's changing in the 21st Century now. Perhaps.

The famous novel by Robert Louis Stevenson, Kidnapped, is all about such a nefarious scenario of involuntary servitude forced upon a young Scottish boy, an heir to a fortune, by his evil uncle who owns most or part of the fortune. The King of England is indirectly the "head" of the powers that are enslaving many Scottish highlanders in this period; but this very popular book is about a parallel individual situation mostly unrelated directly to such politics. There are movies made based upon this book.

I saw on TV sometime in the recent past, that Libya and Morocco are also still found to have slavery.

The institution of marriage is also a form of (usually) voluntary slavery between a man and a woman (usually). There is also marriage of a person and an automobile, until the loan is paid off.

Years ago, I heard that some mostly Creole people (this had nothing to do with married couples) who had left Haiti in duress during the Haitian Revolution, had found refuge in Spanish/(French) Louisiana just before and just after Napoleon pulled out of Haiti and "Louisiana" both, selling the "Louisiana Purchase" to the U.S.A. under President Thomas Jefferson in 1803. Some Creole Haitian slave owners had brought their slaves with them to Louisiana, and settled mainly in New Orleans. I thought this was all there was to know about the extent of "blacks" practicing slavery in the early USA. It makes no sense at all that no one seems to know anything about this subject.

But a few days ago, I did a web search and found this information. I was shocked! I had never heard even a rumor of this information which comes up now. I thought the situation in New Orleans was unique.

Even if you didn't plan on traveling, you still had to pay the captain of the ship. Turns out that a sizable number of those enslaved by other blacks were related family members, and their current black owners could not afford to free the enslaved completely who still had an indenture contract upon their head, owed to some distant third party, usually the ship captain who brought them across the ocean, or a sucessor investor of that indenturement. They could still be bought and sold, but the additional indenture contract still created regular payments due the distant third party until it was paid off.

This is nearly identical to the jail bail and bond system of today, a remaining fragment of the slavery system.

NOTE: a large proportion of white persons also came to the "new world" under indenture to the ship's captain they traveled with. Sometimes, these travelers were involuntarily put on a ship against their will, but usually not.

But there were some actual black plantation owners and business owners who owned actual black slaves as well. Remember that slavery before the Civil War was protected by the U.S. Constitution before the 13th Amendment was ratified in 1865, and was practiced in all states and territories at one time or another.

What became of these black slave owners and their slaves? How did the Civil War affect these black slaves, and their black or Creole owners??? Whose side did they fight on during the War of the Rebellion? There are so many questions that come up about this topic.

Slavery was not just for blacks; white people also still enslave each other through the current anti-abortion system, jail system, and other systems. Are women merely cattle, owned to be exploited for producing progeny?

But we also have places where female "slaves" can flee in order to be discharged of their "obligations". We also have bankruptcy laws and systems that give freedom back to the enslaved, in many cases.

The High Tariff was the Main Cause of the Civil War. Now I find a website that talks about how the high import tariffs enacted by the new northern dominated legislature of the USA in Washington had lain the groundwork for the Civil War far more than the issue of slavery. This website does not argue that slavery was not the nominal cause of the war, but that the dying economy of the south was an even larger cause that pushed the south into a shaky alliance with British and French financiers, far more than moralistic arguments in favor of slavery. Their only perceived hope was "free trade" with European importers of cotton and other agricultural produce. (In the long term, there are no rational moral arguments in favor of slavery.)

Note that after Texas became state number 28, the last slave state to enter the union which occurred in 1846, all the successive states were all free soil ones, resulting in the destruction of the traditional southern dominated era of low tariffs and exported cotton prosperity. The international export/import trade phenomenon which had so far fueled southern prosperity, was destroyed beginning about 20 - 30 years before the Civil War finally erupted.

That the nullification crisis (1832-1833) never really ended until the Civil War erupted, is also a relevant point here.

It's so ironic that so few know today how influenced and dominated were Andrew Jackson's administration, and even that of Thomas Jefferson, both supposedly enthusiastic plantation economy supporters, by the "pro-high-tariff" groups of "Northern" political and economic influences and philosophies.

Both Jefferson and Jackson wanted a stronger USA, so both actually supported higher import tariffs which, along with collapsing cotton prices caused by over production, eventually strangled the plantation economy, newly subjugating American plantation agriculture to an infant American industrial power and capital base, which the "pro-high-tariff" groups wished to encourage and become dominant domestically. This was in conflict with the previous status quo of British and other foreign industry and capital funding the southern plantation economy from the beginning days of the independent American republic.

If the railroads and other "internal improvements" in the USA could've been built earlier throughout the country in order to more easily and cheaply transport agricultural raw materials to U.S. industrial centers, the economic strains which caused the Civil War could've been avoided. Or textile mills could've been built at the ends of all the southern rivers (which never occurred). As it were, it remained cheaper and more profitable to continue sending the raw materials from the south down the rivers, and then to Europe, than to the industrial centers of the USA itself. According to the website, the main reason for Confederate succession was to re-implement zero-tax free-trade with European industrial nations as it had been before the 1830's.